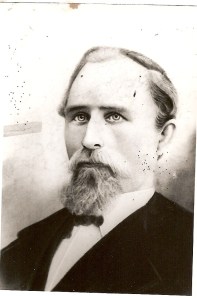 Olavus Jacobson [a,f] was born on November 24, 1845 on the Skaarodegaardseie farm in Skedsmo, Norway, near the capital of Christiania (now called Oslo). His parents were Jacob Jacobsen [a,f] and Ingeborg Marie Olsdatter. [a,f]

Until 1923, Norwegian children took their surnames from their father’s first name. Jacobson means “son of Jacob” and Olsdatter means “daughter of Ole.” Because names like “Jacob Jacobsen” were common, people would also go by their third, “farm name.” So Olavus’s father might be called Jacob Jacobsen Skaarodegaardseie.

Unfortunately, I haven’t yet found a farm with the exact name Skaarodegaardseie. The nearest I’ve found in online indexes is Skaarer-Ødegaarden. It was cleared in the Middle Ages, but then was abandoned during the Black Death and not used again until the 1660s, according to Wikipedia Norway. But again, I don’t know if this is the right place.

Olavus was the youngest of at least five children. He had a brother named Olavus, [a,f] who died the April before he was born. The family decided to name Olavus after his brother. This was once a common practice in northern Europe and the United States. 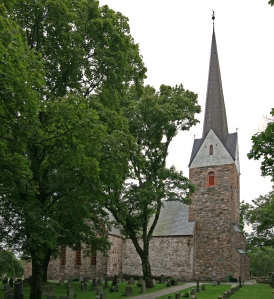 Our Olavus was baptized in the Church of Norway on December 26, 1845. Children were baptized very young. Laws required infant baptism, and a child who died without baptism could not be buried on church grounds. Olavus was likely baptized in the Skedsmo Church that was built in 1189. (It was reconstructed in 1869.)

In the 1850’s, the LDS Mormon Church sent missionaries to Scandinavia. Hundreds of people converted to Mormonism, but the religion was illegal under Norwegian law. The Church created the “Perpetual Emigration Fund” that helped pay for Mormons in Europe to join the main body of the church, which had just located to the Salt Lake Valley in Utah. 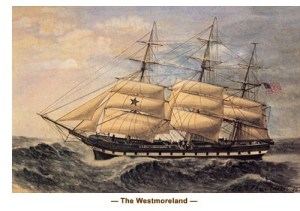 In 1857, Olavus and Ingeborg traveled to Liverpool, where they met with 542 other Mormon travelers, mostly from Scandinavia. They set sail on the Westmoreland, a 999-ton vessel built in Philadelphia in 1851. The trip across the Atlantic took 36 days. Three people died, a baby was born, and five couples married.

The Westmoreland landed in Philadelphia on May 31, 1857. The passengers wasted no time in continuing their journey. They bought train tickets to Iowa City, Iowa. This was as close to Utah as they could get by rail – but it still left them 1,000 miles short of Salt Lake.

Money from the Perpetual Emigration Fund had run out by the time the pioneers got to Iowa City. They were subjected to strict rationing rules, and could only carry 15 pounds each across the plains to Utah.

The pioneers were organized into different handcart companies. Olavus and Ingeborg were put in the Seventh Handcart Company, headed by Christian Christiansen. It was comprised of 330 people, 68 handcarts and 3 wagons. Painter C.C.A. Christensen was a member of the group, and had been on the Westmoreland as well. He  later created paintings of the company’s journey west.

The Handcart Company by C.C.A. Christensen

Handcart Pioneers Coming through the Mountains, by C.C.A. Christensen 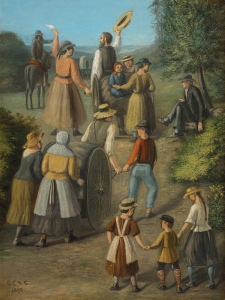 It was the job of the young boys like Olavus to find water and bring it back to camp. Trail journals say they often had to travel miles to find clean water. When they returned, the pioneers fought over who would get it first. The boys had to use pieces of burlap or rawhide to act as shoes.

15 people died on the trail. Everyone was too afraid of a stampede to kill any buffalo. They suffered from hunger as the months dragged on. One desperate man, new to North America, killed a skunk without realizing what it was.

The company finally arrived in Salt Lake on September 13. They joined thousands of Mormons who were already there, building new towns and cities across the Mountain West.

After the experience of the handcart companies, the LDS Church tried a new method of bringing pioneers to Utah. They sent ox and wagon trains from Utah out east to meet the pioneers. Olavus made one of those “down and back” trips in 1866, trying to make it easier for people to make the same journey he had survived a decade before. 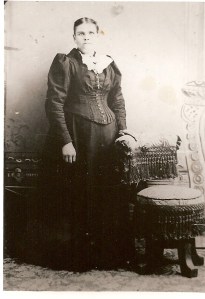 Olavus settled in Morgan City, Utah in 1867, and married widow Mary Amanda Wilcox Parker [a,f] on November 2. Mary was born on March 10, 1850 in a Mormon pioneer camp at Council Bluffs, Iowa. She started her journey to Utah at just three months old. Mary’s father, Henry Wilcox, [a,f] was a New Yorker who had served in the Mormon Battalion during the Mexican War. Her mother, Martha Simmons Wilcox, [a,f] was from Canada.

In 1871, Olavus and Mary left Morgan City to for the northern area of Randolph, Rich County, near Bear Lake. They were among the very first settlers of the area. Olavus was one of the few farmers who had success in the early years. He harvested 175 bushels of oats in 1872. The community shared food and pooled resources, but they didn’t make enough to survive on their own for more than a decade.

After years of trial and error, the settlers found that raising cattle was the best way to make ends meet. Olavus was part of a group that created rules preserving county land for grazing. Below are the two marks that Olavus registered to use on his cattle in Rich County:

The top mark shows where Olavus would brand two triangle’s on his cattle’s right ears. The record book notes that the “O J” brand would be in “position 15.” That is on the cow’s right hind leg.

Olavus was successful both in the church and in business. He served in local bishoprics for 20 years, and was superintendent of the Sunday School. His fortune grew – he was able to buy large areas of land, and founded at least two irrigation companies.

Olavus died on July 5, 1906, after four years of chronic kidney trouble. He had at least eight children, including my great-great-great grandmother, Martha Melissa Jacobson Johnston. [a,f]

Genealogical sources can be found on the Ancestry [a] links next to the individual names.

5 thoughts on “Olavus Jacobson – from Norway to Utah”