Most of what I know about James H. Roberts’s (a,f) military service came from the headstone application his wife, Dorcas Dunn Roberts, (a,f) filled out when he died. (Ancestry.com, U.S., Headstone Applications for Military Veterans, 1925-1963 (Provo, UT, USA, Ancestry.com Operations, Inc., 2012), Ancestry.com, http://www.Ancestry.com, Roberts, James H.) Roberts served in the Student Army Training Corp at Colorado College during the war. I found an old yearbook from the college that details a lot of what he did, and wrote about it in a post last year.

I was curious to see if more records might be out there. Not many personnel records from World War I survive. A fire in St. Louis in 1973 destroyed about 80% of the army records for men discharged between 1912 and 1960. As a result, full personnel records aren’t available.

I wrote to the National Archives in St. Louis to see what might have survived the fire. They sent me photocopies of three pages showing the final payroll the day Roberts was discharged. 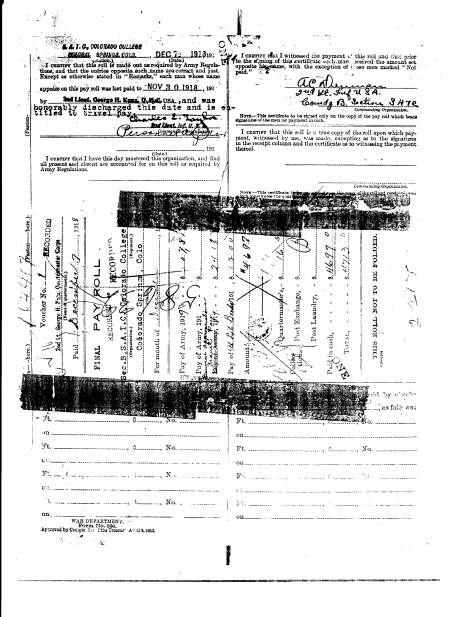 The first page summarizes the payroll on the subsequent two pages. It states that the men were honorably discharged and given travel pay. 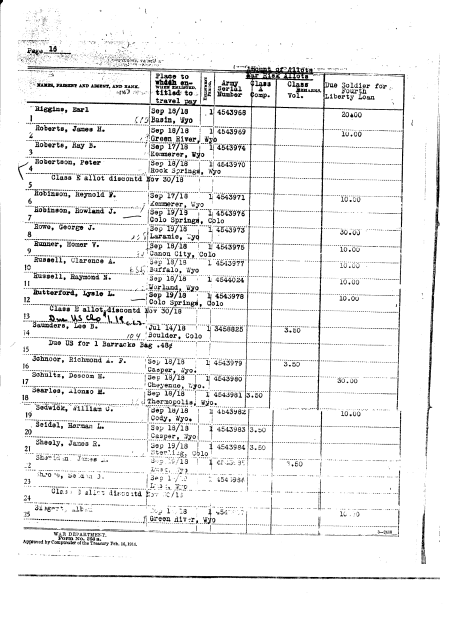 On the third image, there is also a line that says “Due Soldier for Fourth Liberty Loan,” with the amount of $10.00 on James H. Roberts’s line. I’m researching to find out exactly what that means. Was money taken from Roberts’s pay to buy him a liberty bond? I’ll update this post when I find out.

UPDATE: A researcher responded to a message board query I made about the loan. James Roberts purchased a $10.00 Fourth Liberty Loan from his pay. It was callable in 1933, but the Treasury defaulted on it in 1934. The entire affair caused a big legal mess. When the bonds were issued in 1918, people were told they would get back the value in gold. But the nature of the gold market was changed under President Roosevelt. It looks like a fascinating topic – I’m starting with the Wikipedia articles titled Liberty bond and Gold Clause Cases.