In December 1801, Elder John Leland brought a mammoth block of cheese to the White House, as a gift for President Thomas Jefferson. (read about the event here) The cheese made headlines across the country, but Leland also delivered a smaller item that – although less noticed at the time –  would change the way we think about religion and government to this day.

Elder Leland had made a name for himself as a strong advocate for religious equality. He helped convince James Madison to support a constitutional amendment that would guarantee liberty for “Pagans, Jews, Mahometans and Christians.” [1]

So, when a group of Baptist churches in New England and headquartered in Danbury, Connecticut, wrote a letter to President Jefferson, they asked Elder Leland to deliver it on his trip to Washington. The letter expressed support for the president, and for the principle of government neutrality in religion:

Page of the letter from the Danbury Baptists

“Our Sentiments are uniformly on the side of Religious Liberty -, That Religion is at all times and places a matter between God and individuals – That no man ought to suffer in Name, person or effects on account of his religionous Opinions – That the legitimate Power of civil Government extends no further than to punish the man who works ill to his neighbors.” [2]

Leland arrived in town on December 29 [3], and passed the letter along to Jefferson, who received it on December 30. [4] Jefferson’s reply was only three paragraphs long, but he spent the next two days working on a draft response. He submitted it to his postmaster general and attorney general for review. Jefferson wanted to be careful to spell out his views on what the 1st Amendment meant, but without offending New England voters. [4,5]

President Jefferson gave his final letter to Elder Leland on New Year’s Day. It was a bold declaration in favor of secular government and religious liberty: 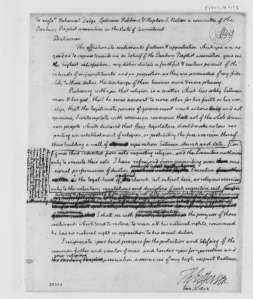 Page of the letter from Jefferson

“Believing with you that religion is a matter which lies solely between Man & his God, that he owes account to none other for his faith or his worship, that the legitimate powers of government reach actions only, & not opinions, I contemplate with sovereign reverence that act of the whole American people which declared that heir legislature should “make no law respecting an establishment of religion, or prohibiting the free exercise thereof,” thus building a wall of separation between Church & State. adhering to this expression of the supreme will of the nation in behalf of the rights of conscience, I shall see with sincere satisfaction the progress of those sentiments which tend to restore to man all his natural rights, convinced he has no natural right in opposition to his social duties.” [5]

Jefferson’s carefully worded political statement was overshadowed in the press by the giant block of cheese Elder Leland presented to the White House this same day. Leland brought Jefferson’s reply back to New England. The letter was printed in a Massachusetts newspaper a month later, and “then was more or less forgotten for half a century.” [4]

That changed in 1878, when the Supreme Court ruled that a Mormon leader named George Reynolds was obligated to obey federal laws against polygamy, despite what he saw as his religious duty to practice it. Chief Justice Morrison Waite quoted the same section of the letter as I did, and wrote of it:

“Coming as this does from an acknowledged leader of the advocates of the measure, it may be accepted almost as an authoritative declaration of the scope and effect of the amendment thus secured. Congress was deprived of all legislative power over mere opinion, but was left free to reach actions which were in violation of social duties or subversive of good order.” [6]

Jefferson’s metaphor of a “wall of separation” was used again by the court in the 20th Century, and continues into the 21st and the dominant way Americans picture the idea of religious freedom. It is fitting that Leland, in his small role, carried the writings that helped define the 1st Amendment that he himself played a crucial role in passing.

[1] Leland, John. “Short Essays On Government, And The Proposed Revision Of The Constitution Of Government For The Commonwealth Of Massachusetts.” InThe Writings of the Late Elder John Leland: Including Some Events in His Life, 476. New York: G. W. Wood, 1845. http://books.google.com/books/about/The_Writings_of_the_Late_Elder_John_Lela.html?id=bMAiAAAAMAAJ (accessed April 5, 2015)